... As with the songs on Sports, “The Power Of Love” was self-produced by the band. Mixing was handled by ’80s radio Svengali Bob Clearmountain. This creative freedom was a point of pride for Lewis, who had actually left Clearmountain detailed directions on how he wanted the song to sound.

In a 2014 interview with the blog Whopperjaw, he animatedly recalled his label’s subsequent attempts to fudge the musical direction, specifically by ambushing him with an unexpected remix. “We go to Chrysalis and they play us Clearmountain’s mix of ‘The Power Of Love,’” Lewis said. “Which sounds okay. It doesn’t sound particularly great, to be honest with you, but it sounds okay.“Then he [the guy from the label] says ‘Well, we’ve also had a dance mix done.’” He continued. “I said, ‘What?’ ‘Yeah, we had a guy called John Luongo who did a club mix.’ I said, ‘Club mix?’ It was the first time I’d heard the term and this was in ’85. So he says, ‘Well, just check it out! He’s done a 12-inch seven-minute dance mix of the song and he also did a single version too.’ I said, ‘What do you mean he did a single version?’ You see, I’m producing this record and I’m thinking, ‘What the fuck, they gave the tapes to somebody to produce this thing without me knowing about this? What’s going on?’”The problem seemed to be that the remix was a surprise, because Luongo—an industry veteran who was known as an innovative remixer, mixer and producer—was on friendly terms with Huey Lewis And The News.

In fact, Luongo had done a dance remix of “I Want A New Drug” in 1983, to the apparent delight of everyone involved. Speaking to The A.V. Club, the remixer recalls Lewis inviting him to see the band play at Madison Square Garden, because he had a “surprise” for the remixer. “The surprise was, he loved what I did with the mix so well, and so much, that he changed the entire arrangement of the song to fit my mix,” Luongo says, specifically citing the beginning chord progressions becoming more prominent. (Comparing the Sports studio version with a mid-’80s live version and Luongo’s remix bears him out.) “I went backstage, and him, his guitar player Chris, the drummer, everybody—they were hugging me,” Luongo recalls.... 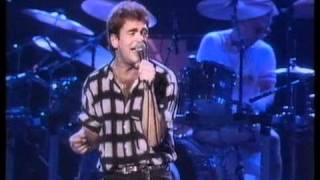